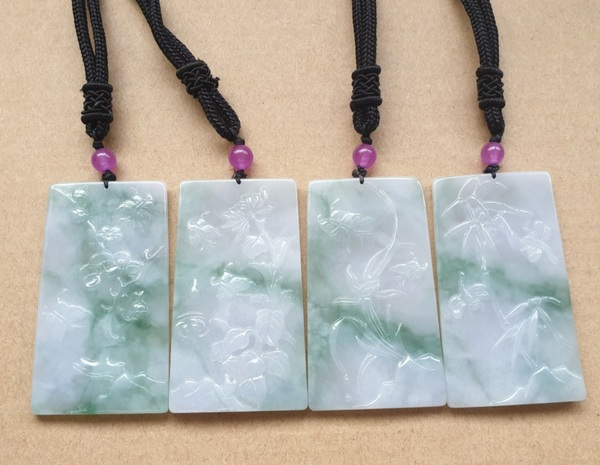 Set of 4 Type A Burmese jadeite carved pendants. All from the same jadeite boulder, strung and ready to wear or to be gifted! To go as a set of four only.

Substantial! In ancient China, people called a man of great virtue a gentleman. In the world of flowers, plum blossoms, orchids, bamboo and chrysanthemums are known as the four gentlemen in China because these plants’ natural character have something in common with human virtues. They have all long been featured in ancient paintings and poems used to express loftiness, righteousness, modesty and purity by Chinese literati. Plum blossoms Plum blossoms are cold-resistant flowers that bloom in early spring. According to historical records, plum blossoms appeared on drawing paper 1600 years ago. Painting plum blossoms came into vogue by the Northern Song Dynasty (960-1127); at that time, the most famous painter was the Buddhist monk Zhong Ren who created a unique way of drawing with Chinese ink, controlling its shades to give the painting a very active appearance. Orchids Grown in deep mountain valleys, orchid is one of the top ten well-known flowers in China. With delicate fragrance refreshing people’s minds, and the elegant figures swaying slightly in the wind, orchids are equal to elegance in Chinese people’s eyes. The greatest orchid painter was Zheng Banqiao in Qing Dynasty who attached great importance on the nature of orchids. He had a preference for painting wild orchids, and he planted potted orchids by himself and transplanted them in the mountain after spring with the expectation of them growing naturally. Bamboo In traditional Chinese culture, bamboo is a metaphor of vitality and longevity, which usually relates to man who has exemplary conduct and nobility of character. Silently grown in desolate mountains, bamboo is very slim with joints on their stem and their leaves are like scabbards. Their firm and indomitable willpower was admired by many ancient literati and painters. Famous poet Sushi once wrote down “Rather eat without meat than live without bamboo” in his poem to express his deep love for bamboo. Chrysanthemums Planted as early as three thousand years ago, Chrysanthemum is a traditional flower loved by Chinese people. When nearly all the flowers are withered and bare in late autumn only the chrysanthemums withstand the heavy frost and bloom energetically in graceful shapes and bright colors. Chrysanthemums have been given more meanings under the pen of literati. The most well-known verse about chrysanthemums is “Plucking chrysanthemums under the eastern hedge, I calmly view the southern hills”, which comes from the famous poet Tao Yuanming’s poem “Drinking”, showing the leisure of Tao’s reclusive life.

Payment by bank transfer with sender to pay bank charges, or Xoom or Transferwise.
Registered airmail 10 to 21 working days. EMS and other faster methods at cost to be borne by sender.

I am a private seller so no refund unless it tests negative as a natural Type A jadeite with no treatments with lab report.

Email exportfashionsg@gmail.com
Price is in USD$